John Frame has undergone some major artistic shifts. He initially wanted to be a writer, but decided he couldn’t cut it in literature. So, he turned to visual art. After two years digging into art history and critical theory, he dived into sculpture. For decades, that was his medium, but after experiencing a long artistic block between 2000 and 2005, he threw in the towel. 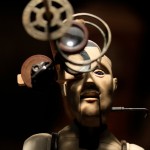 John Frame — The Unanswered Question
Not long after that, he had an artistic reawakening when he began an animation project. Once again, he delved into researching a new medium, and began to experiment with filmmaking and stop-motion techniques.

His exhibit at the Portland Art Museum showcases the current stage of that project. The show is a collection of photos, sculptures, and videos featuring fantastical characters that come alive in the animations.

Have you been to John Frame’s exhibit at the Portland Art Museum? What was your experience with the work? What questions do you have for the artist?