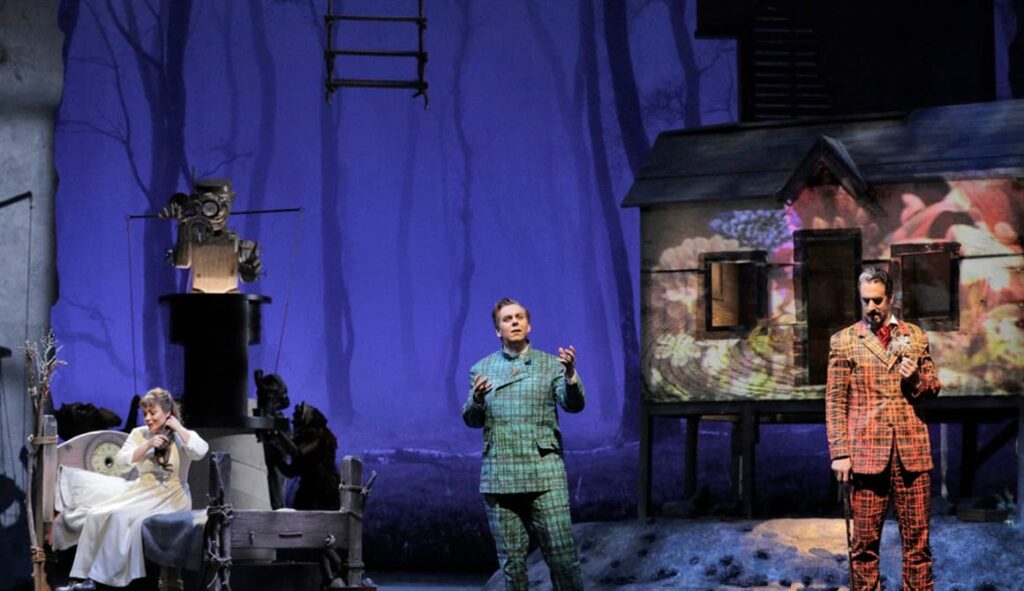 There’s probably a clear dividing line on this production. If you prefer a grand opera like “Faust” to be grand in terms of tradition and that sort of thing, then this probably wasn’t for you. If you are open to a more modern staging such as what you may get overseas, then this was a visual feast for the ages and shouldn’t be dismissed as regie-theater.  READ MORE. 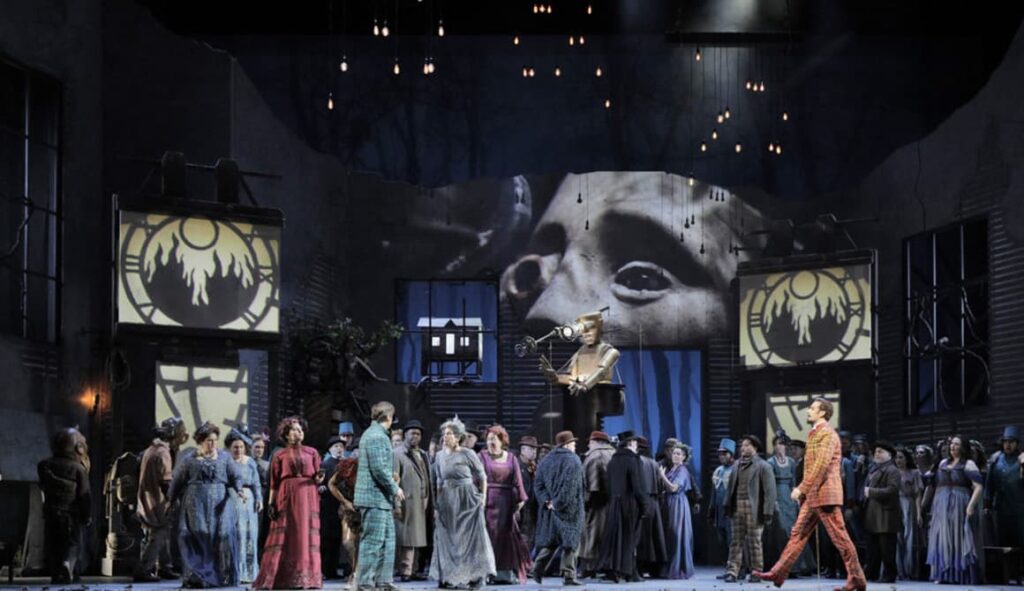 I am actually still processing everything I saw on stage at this opera.  It’s one of those things so rich in detail and imagination that you’d most likely have to see it multiple times to get everything that went into it. Other than last year’s Les Troyens, this may be the best thing I’ve ever seen at The Lyric and I’ve seen some amazing productions here over the years. You simply must go.  Every performance should be sold out.  READ MORE 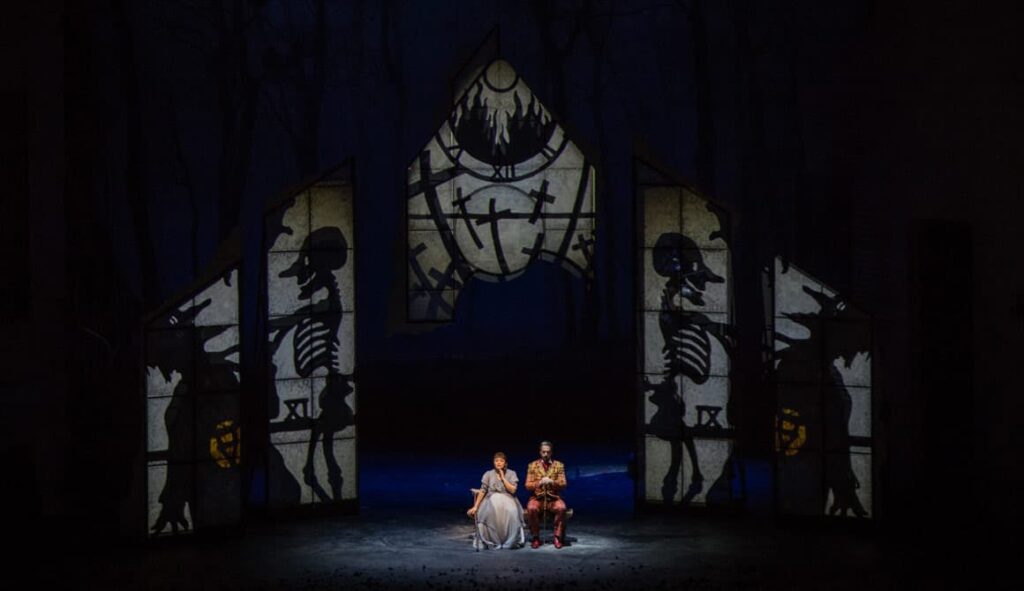 A kind of twisted, egotistical apotheosis: Faust in Chicago

At the Lyric Opera of Chicago this month, Faust is a frustrated artist, whose own carvings and objets come to life to torment him. This new production is the result of a unique collaboration between visual artist John Frame (whose artwork and guiding aesthetic shaped the opera’s look), set and costume designer Vita Tzykun, lighting designer Duane Shuler, projection designer David Adam Moore, and director Kevin Newbury.  READ MORE

More Reviews of Faust at Lyric Opera of Chicago 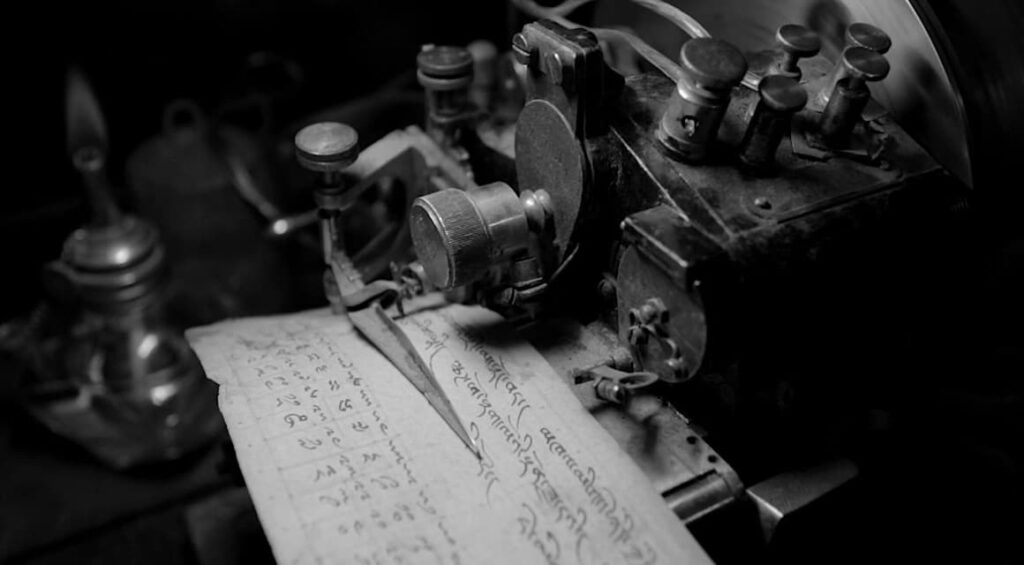 An artist is mysteriously held captive in a workshop where he creates complex characters in an attempt to communicate with his past. World premiered at David Lynch’s Festival of Disruption and earned a 2016 Student Academy Award. Production Design: John Frame.

The Academy of Motion Picture Arts and Sciences  has given Johnny Coffeen one of this year’s Academy Awards for Student Directed Films for his work on “The Swan Girl.”  The 15 minute short is an experimental live action/stop-motion production in the Alternative category,  and was one of 17 films worldwide to be receive the Award in 2016.  This was Coffeen’s MFA film at the David Lynch Film School.  In addition to Directing and Editing the film, Coffeen co-wrote the Screenplay with artist John Frame. Frame is credited for Production Design, Animation, Score and Acting in the film. 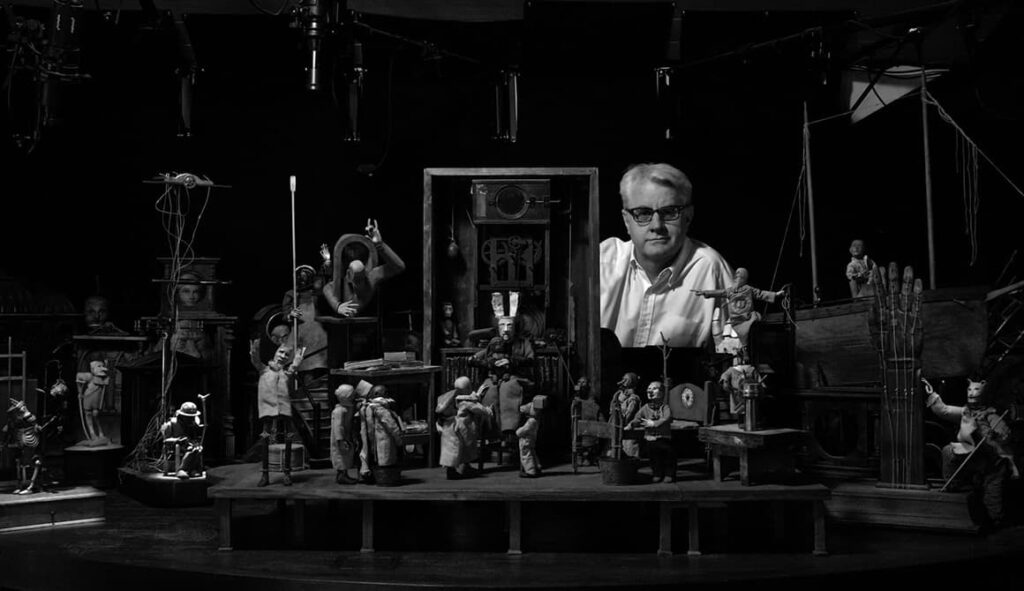 FOR the last seven years, John Frame has been working on a film in his home in Wrightwood, Calif. Its cast includes a cockeyed skeleton, a bespectacled monkey and a horned man sporting a cloak adorned with eyeballs. Mr. Frame made all of the characters himself out of wood and found objects, built the sets, even composed the score. When he discovered that his characters were going “wherever they wanted to go,” he let them. For the first four years of the project, he worked completely alone, driven by what may have been a muse or “daemons,” he’s unsure which; not even his closest friends and colleagues knew what he was up to.

Mr. Frame is part of an underground group of stop-motion artists in Southern California who labor in the shadows of the major studios. Long the center of studio-backed stop-motion animation made by artists like Ray Harryhausen and Art Clokey, the area is now home to scores of solo practitioners more interested in creating highly personal art pieces than commercial works. This year looks to be a strong one for stop-motion features, with big-budget releases including Sony Pictures’ “The Pirates! Band of Misfits,” Laika’s “Paranorman” and Disney’s Tim Burton film “Frankenweenie.”

Unlike the creators of those movies, Mr. Frame and his colleagues work alone or with the smallest of crews, creating makeshift studios in their homes. On a typical day, Mr. Frame can film from 1 to 10 seconds of footage, 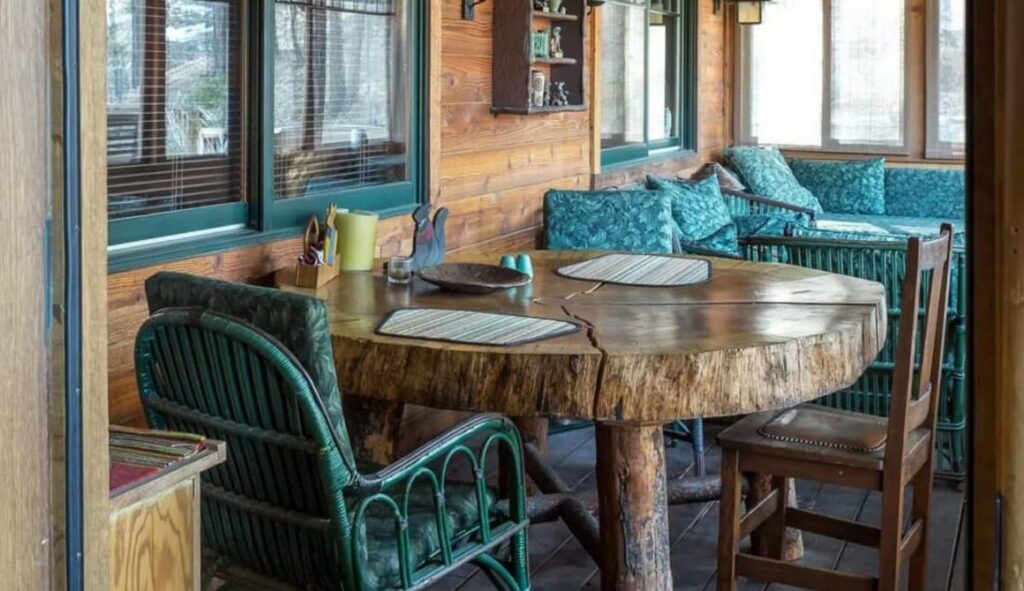 Photographer/Writer Jessica Isaac visited our home and put this set of shots and observations about the house together for Apartment Therapy in February of 2016.  Laura and I were very grateful for the care and attention she gave the house that we have lived and worked in for the past 30 years or so.  See the shoot here: 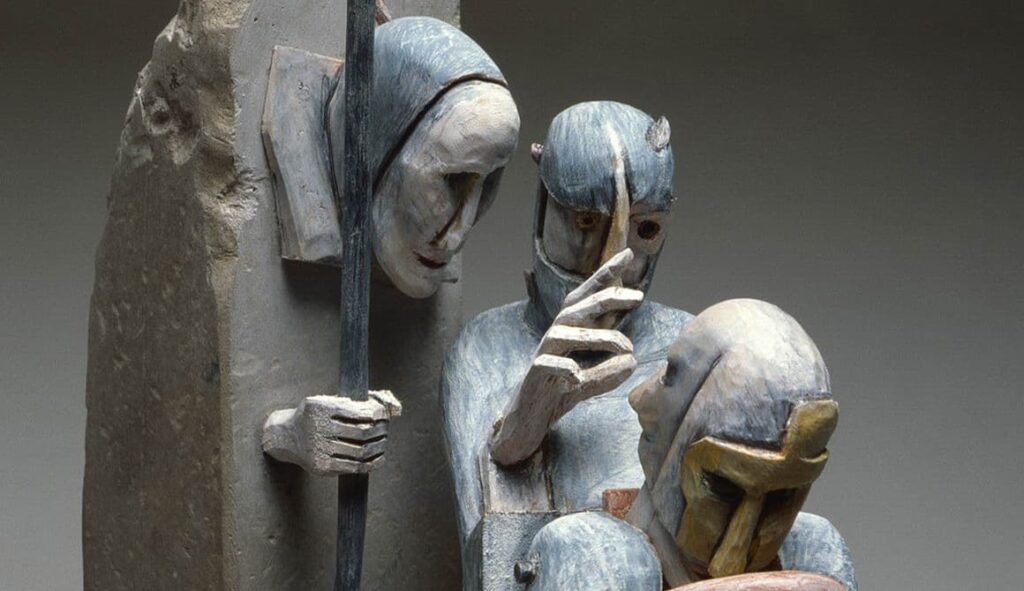 If John Frame were in the movie business, he would be a costume designer, stylist, set decorator, prop master, lighting specialist, writer, director, editor, producer, agent and publicist all rolled into one do-it-yourself lover of every little detail of every little job.

But Frame is an artist, so he plays all these roles with far less ballyhoo than Hollywood often festoons on its egomaniacal micromanagers and do-it-all control freaks.

At the Long Beach Museum of Art, the fruits of Frame’s patient labors are displayed in a wonderfully engaging exhibition in which intimacy takes center stage. Sensitively selected by Gordon Fuglie, director of the Laband Art Gallery at Loyola Marymount University, “Enigma Variations: The Sculpture of John Frame, 1980-2005” is made for folks who prefer the solitude of out-of-the-way libraries to the cacophony of malls and the hyperactivity of video arcades, both of which big, crowd-seeking museums are beginning to resemble a lot more today than when the 54-year-old artist started showing his work. 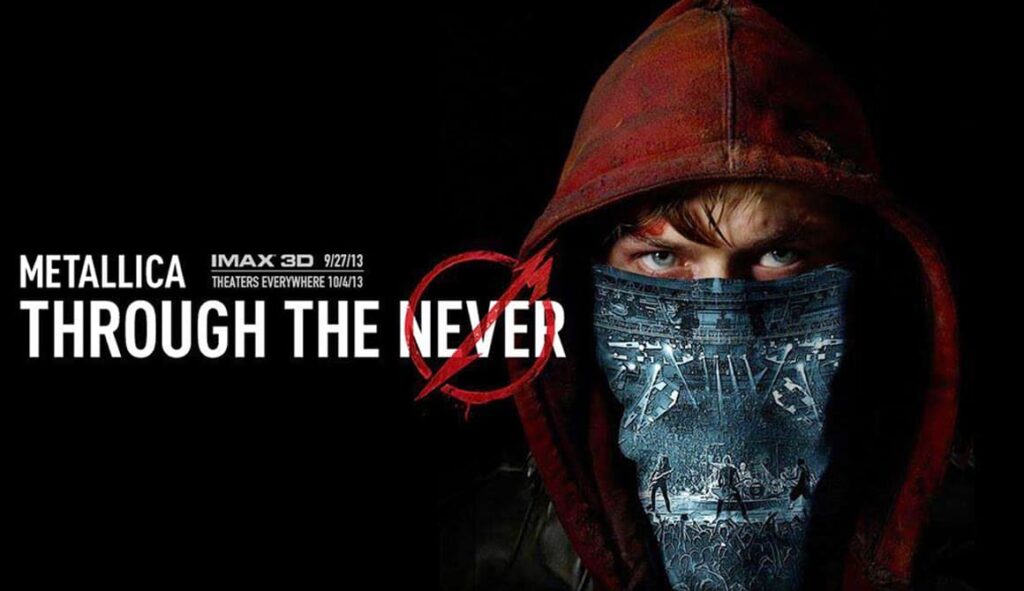 UPDATE:  I sincerely wish I could produce copies of Little Man for all of you who have made requests, but I do not own the copyright at this point, Metallica does.   For folks pursuing the subject, please contact the Metallica organization directly.  I believe they are located in the Bay Area and called “Hit the Lights”. Best to you all!  John 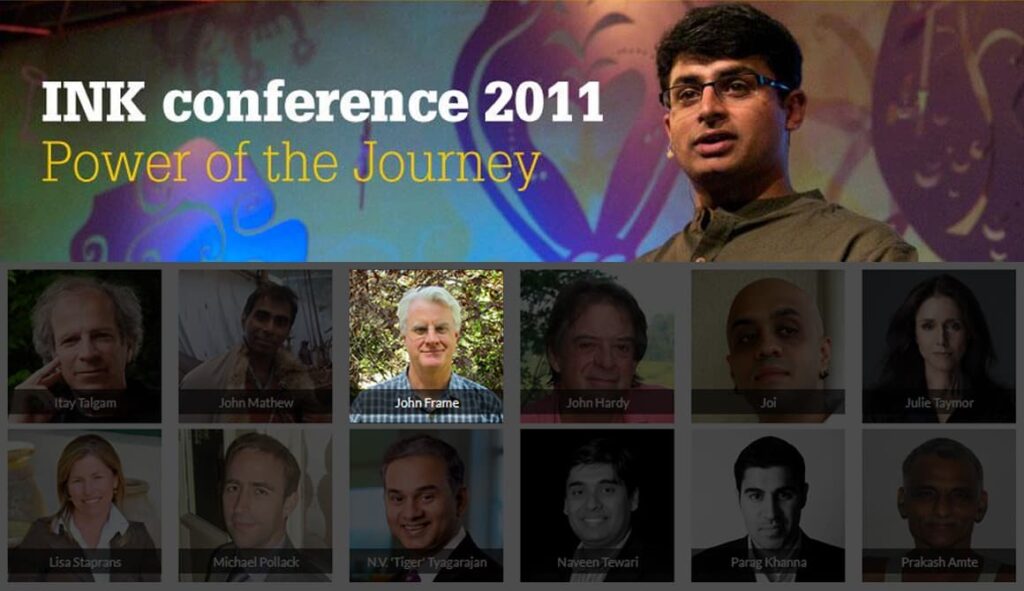 Think of INK as a curator of contemporary oral history. We do an extensive global search to find the best ideas to invite to our events. Our cornerstone event is the annual INK Conference in association with TED, which brings together the world’s movers and shakers who then share ideas. The exchange of stories, ideas and dreams does not start nor stop at the conference; it is merely one of the many methods that facilitate the open exchange. In addition to our annual conference, INK also hosts KIDSInk and INK salons, mini conferences, across the globe. If you are interested in hosting an INK salon in your community or campus, please contact us.