A number of people have asked about the equipment that we are using for this project. The Canon 7D has been our camera of choice during most of the filming.   It is incredibly versatile, especially given this range of work we have undertaken. For example, in the scene with the grass we were able to utilize single frame photography for the stop-motion elements, a time lapse program to capture the grass growing, and the Canon seven D’s live function for several of the hand-held shots of the grass and the details of bed.  In the montage section of the film we used the rapid sequence function of the camera to capture several views of O-Man in the smoke.  In addition, the 7D was our primary camera for all of the catalog photographs and for the shots chosen to enlarge for the exhibition. 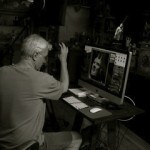